WHY FAUST? - AN ESSAY DURING COVID-19

A Present For You

My name is Joseph T McGarry M.D.  I am a Family Practice doctor in rural Colorado, ein Landarzt, joke intended. My present is not a new type of snake oil or magic fat reducer. It is the the free giving to you of the screenplay for a movie, which my friend, Dennis Cordova, and I began in 2008. It is entitled: Goethe’s Faust, a Colorado Documentary.

Goethe described Faust as a “serious joke.” Our efforts to make a film were fully serious and earnest. Eventually we produced an eight hour movie. It was submitted to two German and several American film festivals, which allowed for longer movies. Eight hours, however, did not fit into the time schedules of any venue, and the film was courteously rejected.

There was some interest in the United States for me to compress or abridge the film into a more typical length. We did this and made a new two and one-half hour movie entitled: Goethe’s Faust A Tragedy Then. A Tragedy Now. The change in title reflected the opinion that we needed to promote the currency and modernity of its themes and content. The film can be purchased on Amazon. This film preserves the flavor of the original eight hour movie and may be the endurable amount of seat time.

I think my screenplay will resonate with both English and German speaking people. I am making the work available to everyone at no charge. It is something for which I am obviously passionate. I think there will be others who will be able to relate to this and are willing to invest the time to read and examine it.

To download the complete eight hour film transcript, of  Goethe’s Faust, a Colorado Documentary click on either button below.  Enjoy the journey of  Faust! 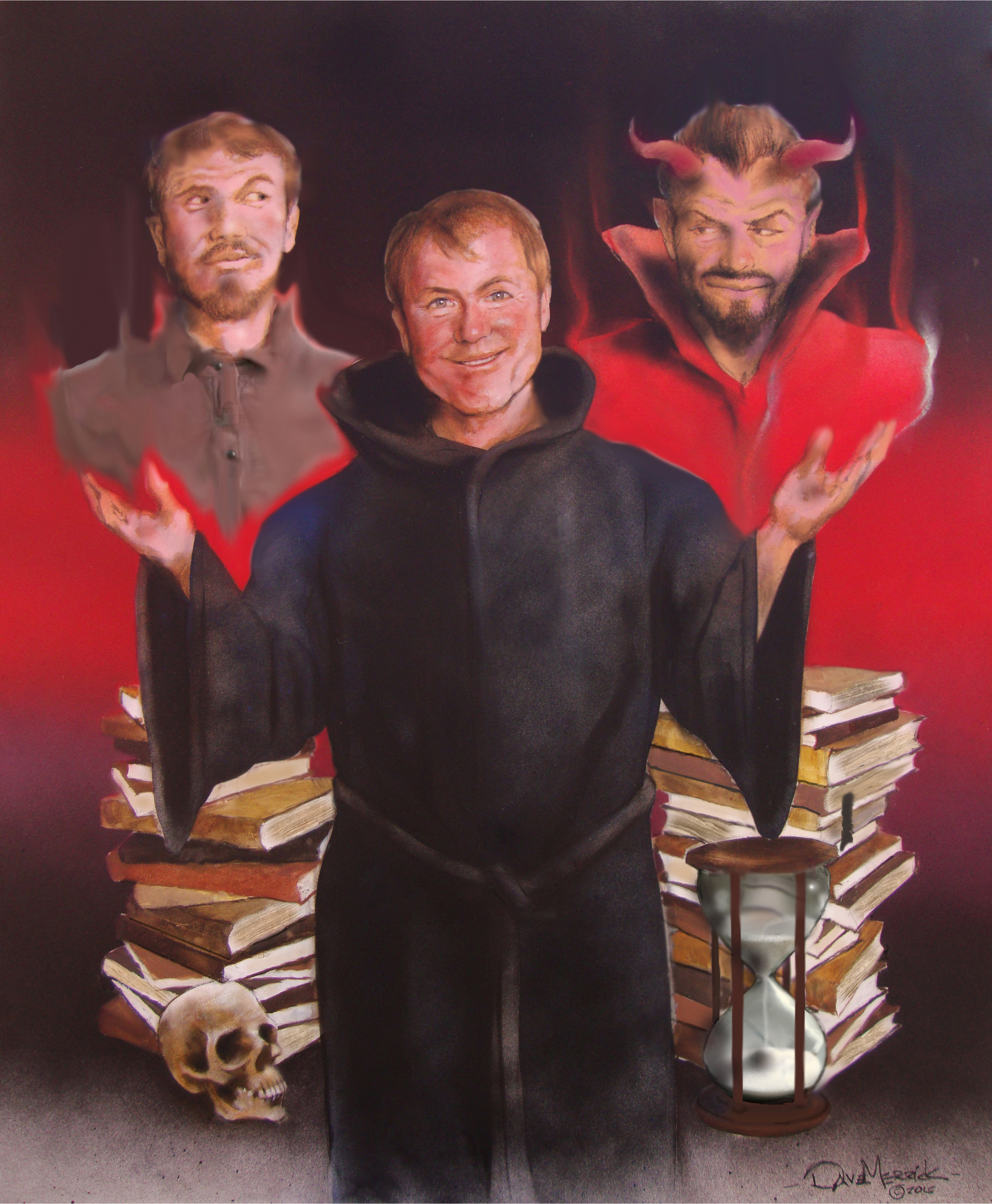 About the Making of the Film

In 2008 at age 60, I asked my friend, Dennis Cordova, to partner with me in making the documentary. He agreed. I had lived in Colorado for 35 years and marveled at the tireless natural beauty. I would try to use this scenic splendor as a visual score for the movie. For example, when Faust becomes increasingly confused, depressed, despondent and devoid of moral compass, we tried to find a locale that might visually echo this emotional state. We filmed this “Wager” or pact with Mephistopheles scene on an unusual Colorado day of rain, mist and fog in and around a tunnel chiselled through granite on Phantom Canyon Road, the old railroad bed which hauled gold from Cripple Creek during the Colorado Gold Rush. For “Pleasant Landscape” in Part 2, we went to Crested Butte, Colorado. It has an unsurpassed wild flower season in a region of mountains and rivers. It seemed to me that I could match the stage directions with places which I knew very well near my home. 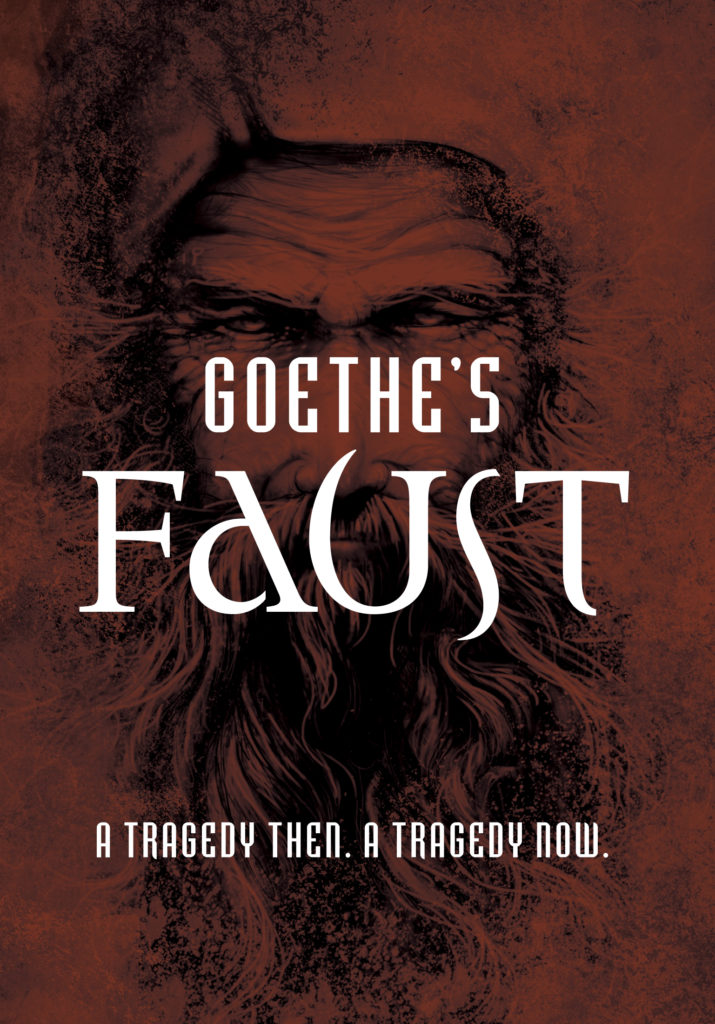 Goethe’s Faust
A Tragedy Then. A Tragedy Now.

I wanted to make the story of  Faust flow. Some translations try to keep the meter and rhyme. The story, sentiments and profound observations, I think, get mangled in the process. I preferred to make the story as comprehensible as possible. However, I wasn’t satisfied with my first attempts and eventually reshot the early scenes of Part 1 after most of the rest of Part 1 was done, when I had developed a routine that worked for me. I didn’t trust again my improvisational skills. With help from six or more translations I wrote out the script and memorized it.

The process in production was to shoot the parts of the play first. These scenes were shot outside in Colorado near my home. This is challenging . There were countless delays and reshoots because of capricious wind. The documentary components, such as the “Many Loves of JW Goethe” were shot primarily in the studio of Mark Tachna, Colorado Springs Video. Mark had a green screen and a teleprompter. The teleprompter seemed like cheating: memorization not necessary. The green screen allowed me to use my personal photographs of Colorado to try to match the emotional color of what I was saying.

Part 2 was a most challenging story to tell. Goethe described Part 1 as objective and Part 2 as subjective. Acts 2 and 3 of Part 2, which are dream scenes, are laden with Greco-Roman mythological references. The relationship to the main story line can be obscure. I think my telling and explanation are reasonable.

The cinematography was completed by Mike Huxley of  Braveworld Productions at the Gibson Mansion in Canon City, Colorado, which is owned by Brendan Pardue. It has a unique decor which includes life sized sculptures of Michael the Archangel in full battle array.  Mike also filmed the “Sons and Brothers “ in concert, which is integral to the movie.

Mark Tachna, performed successfully the daunting task of taking the three different camera formats and finding a common editing process. Closed captioning followed and then came the process of abridging the original 8 hour documentary into the shorter version. Take a look at the trailer to get a taste.

I was fortunate to have the the documentary begin with my good friends, Sons and Brothers performing Measure of a Man.  I was happy they could contribute to the film. I have thought my movie might serve as the same platform as “The Ed Sullivan Show” did on February 9, 1964, when he introduced The Beatles. (Ed who?) They are very talented and popular musicians. The cinematography was great and done by Mike Huxley of Braveworld Productions. Have a listen!

Measure of a Man,
Lyrics by Sons and Brothers

We were holed up on Black Mesa
Near a wash that had no name
Straining and seeking shelter from the sun and pouring rain
Three days of  hunting mavericks on a god forsaken ranch
There was plenty ventured boys, but nothing gained

I was moaning and complaining about the life that I had led
I said Jim there must be better ways for a man to get ahead.
And if it ain’t cold and freezing then it’s hot as hell instead
Jim just fixed a level gaze at me and then he said:
It’s times like these that takes the measure of a man
It’s times like these you choose to run or make a stand
Oh the dark night of your soul is here to help you grow
And you will find that you come to treasure all the times,
you met the measure of a man.

We Had Some Fun!

A friend, Bob Bliss, accompanied Dennis and me to the High Country of Westcliffe. It was really cold and really high. Because of that combination I had to repeat my lines so many times that Bob said that he now knew my lines better than I did. The “Tongue of  Toad” adventure was filmed at Bishop’s Castle. It was really cold! We had to retreat frequently to the truck and its heater. We thought of using the contents of the coffee thermos to warm our hands.

“Tongue of Toad” is one of those George Carlin expressions that you just hardly hear or say and pretty soon it doesn’t make any sense!

I was introduced to “Faust” in 1965 by Father Eugene Schwarz O.S.B. at St. Benedict’s Preparatory School in Newark, New Jersey. In my high school years,  the two most formative people were my wrestling coach, John Allen and Father Eugene. ( To be clear, unequivocally, the persons most important and formative in my life were my parents.) 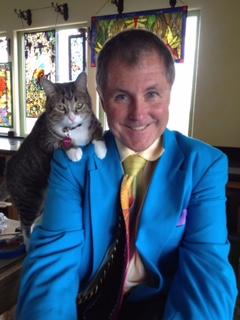 Father Eugene’s classes were models of precision and organization. First, there was oral testing on vocabulary. Then we were frequently assigned to create a conversation with a classmate using recent grammar lessons and a long list of  German idioms. Those conversations were heard. Homework was collected. Then we had a grammar lesson. Then Father Eugene played his reel-to- reel tape deck and we listened to his cherished recording of  “Faust,” which was recorded in Germany. We followed along on our mimeographed text sheets. (Anyone not remember the heady aroma of fresh mimeograph ink?) Certain lines were marked for memorization. Assignments were given. The class concluded with Father Eugene at the piano leading us in singing of German songs.

Father Eugene had a profound respect for Goethe’s contribution to the German language development. He would say: “If you were learning German on Herr Goethe’s knee, he would teach you that…” I was struck, when he told us how “Faust” was a work of Goethe’s entire adult lifetime. Goethe would work on it, put it away and then sometimes years later resume work. Certainly he himself changed in these interims, yet he kept all the pieces written at different times together in the play.

This admiration transferred to me in part because I recognized a special quality in Father Eugene. He ran like a Swiss clock. He was recognized for his own musical talents. He was asked to sing acapella at a large open ceremony in New York City. His face was deeply creased by the lines of his perpetual smile. He coached the award winning Glee Club. He did all this while dealing with his own personal devil, multiple sclerosis. My friendship with him continued throughout college and medical school. I would understand better what he had to battle to maintain his smile and energy level.

One of our teachers at St. Benedict’s advised us: “ Question everything. That way, what you hold onto will truly be your own.”

In the following decades I was curious to see what light Herr Goethe’s “ Faust” might throw on the process.

I am a Diplomate of the American Academy of Family Practice. I received my education at St. Benedict’s Prep in Newark, New Jersey, the College of the Holy Cross in Worcester, Massachusetts and the Milton S. Hershey Medical Center of the Pennsylvania State University, Hershey, Pennsylvania.  I then completed Family Practice residency at the Eastern Virginia Graduate School of Medicine.

I married Susan Cassidy in 1977 and immediately after completing residency that year moved to Florence, Colorado and joined the staff of the Florence Medical Center, where I have remained since.  I served as staff physician at St. Joseph’s Hospital in Florence and later served as staff physician and hospitalist at St. Thomas More Hospital in Canon City, Colorado.  I  began work at the Colorado State Veteran’s Nursing Home in 1978 and have served as its Medical Director since 1999.  In 1978 I also began work for the Colorado Department of Corrections as facility physician and Chief Medical Officer until my retirement in 2003.

Susan and I have one son, Sean. He is an anesthesiologist and resides with his wife Emily, a Family Practice doctor and Hospice director in Corvallis, Oregon. Our family moved in 1983 from Florence to neighboring Penrose, Colorado after building by hand a southwest inspired adobe home.  Sue, an R.N., has a rare gift for animal care. Her charges have included dogs, cats, horses, ferrets, rabbits and free range birds and coyotes. (The gotta eat too, ya know.)

In September 2018 the City of Florence honored me with the “Outstanding Community Service Award” for  a lifetime of service. “You have dedicated your life as a physician to the Citizens of Florence for over 41 years. Your dedication to your patients is unparalleled.”

Why Faust? By Joseph T. McGarry, MD The Faust blooper reel contains an interview with a German exchange student. He joined us for a shoot on Upper Beaver Creek in the Beaver Creek Wilderness Area. I asked him if he had studied Faust in school, and he said:...

Receive the eight hour documentary
transcript in its entirety for free.

Receive the eight hour documentary
transcript in its entirity for free.